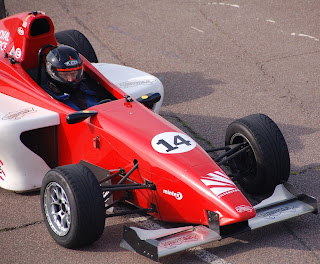 As you know, I love motorsport. You probably also know that the motorsport that I love the most is Formula One. It is for this reason that my lovely wife Victoria decided in her infinite wisdom to buy me a Silverstone Single Seater Driving Experience for Christmas last year. The weather got a bit better so I finally booked my experience a few months ago for the 29th August.
Victoria knows me well. She knows that any driving experience bought for me would have to be as close to F1 as possible. It's OK driving a Ferrari or an Aston Martin but no matter how fast they are they are still road cars and therefore sanitized to allow people to drive them safely. She also knew that we both consider Silverstone to be our own personal racetrack so as great as Donnington is, Silverstone is where I would want to be.
We had to be at Silverstone for 07:45. As we were driving in we were excitedly explaining what everything was to Alice and Amelia and they listened but I don't think they were particularly bothered. We were though. We love Silverstone and get excited whenever we drive past let alone actually go there.
We arrived and headed to the middle of the track to the experience centre. I went to reception and was signed in and nearly made a big mistake. I was offered £10 insurance cover in case I prang the £100,000 car I was driving as otherwise I would have to pay £50-100 of the damage myself. Pah! I'll take the chance I thought and said no. Victoria then piped up and said I was mad. I then realised that I mis-heard and would have to pay £15 hundred towards the damage. I paid the £10!
First of all we had a drivers briefing. All those driving sat in a room while a Silverstone instructor was arrogant and patronising towards us all. Still, I resisted the urge to call him a cock and instead listened to him talk about racing lines, breaking points and the 110mph smash that someone had the day before because they were being stupid. Once this was over it was finally time to drive!
We walked over to the pits and were all given helmets. We there then allocated cars and were strapped in by they instructors. Then we were told what the various controls were and how to start the engine (a switch AND a button! Very cool).
At last it was time to drive.
The cars were were driving were specifically built for Silverstone and are actually called 'Formula Silverstone' cars. They are 1.6l open wheeled single seater's that have no ABS, no traction control and no synchromesh on the gearbox. This meant that is was a bit tricky to get the car into gear at first but I soon got the hang of it. They are 'proper' racing cars. None of that road car nonsense!
They also had a very sharp clutch with is why I managed to Kangaroo the car down the pit-lane when I first set off. The liberal application of 4000 revs soon fixed that though.
Once I got going we had 2 laps behind a couple of pace cars, mainly to make sure we all got used to handling the cars while driving at a reasonable rate rather than slamming the accelerator to the floor and immediately putting it into the wall. A good idea indeed. Once the initial 'slow' laps were done the pace cars pulled into the pits and it was time for some fun!
The cars were so amazingly fast. I can't tell you how fast as there was no speedometer but they felt fast, and when accelerating you were really pushed back into your seat. The most incredible part though was how fast you could go round corners. These things really stick to the road like glue and my neck was aching by the time we had finished.
My lap times were improving as the session progressed which was good. I started by doing a lap in 1:28 and at the end I was doing it in 1:09. There was one annoying point where I was being overtaken by a faster car. I pulled to the right to let it past and four cars behind him took the opportunity to overtake me too as I wasn't fast enough to get back on the racing line. DOH!! Apart from that it was all good.
Sadly the session was over far too quickly. The chequered flag was waved and we all peeled into the pits. What a great experience though. I'd recommend it to anyone. I was giddy for the rest of the day and really want to do some more race driving as soon as possible.
Victoria took loads of pics while I was driving, the best of which are here.
Thank you for such a great present.
Labels: 2011 Driving experience Silverstone