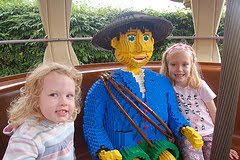 OK, so once again my post is about 2 weeks late, and I can't really say I've been busy as I've just had 2 weeks off, but children take a lot of looking after and there was a lot of SpongeBob to watch!

Anyway, 2 weeks ago we took the kids to Legoland in Windsor. I have to admit that this was partly because Victoria and I wanted to go but it was for the kids too. :-)

We left Sheffield on the morning of the 11th and headed straight for the park. We had a 2 day pass and wanted to make use of both days so we went straight there.

What a great place! We were all really impressed. The staff were all really friendly and seemed to be happy in their work. The park is big enough not to feel totally packed with people and the rides mostly have an interactive aspect to them which makes them much more fun.

The first place we headed to was the driving school. Alice has seen this on the Legoland website and was very excited about earning her Legoland driving licence. There was a section for under fives and a section for 6-13 year olds. I have to admit that I didn't think that Amelia would have a clue about what to do driving a car but she was great. Alice too was brilliant, stopping at red lights and junctions. The only bad part of the ride was that the driving licence cost £6 each!! I think not! At the end of the rides you got a blank licence which you then paid £6 to have a picture put on it and have it laminated. I brought the licences home and did that myself. :-)

OK, so that was a bit tight but considering we had paid for the park and the hotel already I was spending a massive amount of money on food and sundries. For example, Alice wanted burgers for lunch from the Legoland own brand McDonald's/BK stand and 2 burgers and 2 chicken nuggets came to £25!! Crazy!

Over the 2 days we were there we managed to have a go on most rides. All were a success apart from the Pirate Ship which scared the shit out of both the kids. We only took them on it because they insisted and neither of them enjoyed it. Strangely enough though they loved the rollercoaster which I would have thought would have scared them more. Personally I think the new Atlantis ride was the best. You ride on a Lego submarine and get to see lots of live fish and sharks. This was one of the few rides we had to actually queue for but it was worth it.

At the end of each day we exited through the shop and bought some Lego. We like the kids having Lego as we like to play with it with them, which as all parents know is a big bonus when you think of the hours playing with some of the crap they have.

The hotel we stayed in was the Hilton St Anne's Manor in Bracknell. We were just as impressed with the hotel as we were with Legoland. The staff were all very friendly and seemed to enjoy being at work. There was a colouring area for the kids, a Nintendo Wii for them to play on and the food was excellent. The bar was a bit expensive but this is a Hilton so what can you expect. At least when I ordered my 16year old Lagavulin the Spanish girl behind the bar explained how it was her favourite whisky and after pouring in a single measure she added at least another half measure as a little bonus. Now that's what I call service.

All in all a great couple of days away. If you have kids I'd highly recommend going. It's a bit expensive but what isn't these days? If you go to the Legoland website you can get some great deals on the hotel and park if you buy them both together.

Alice Briddon said…
what a great time in legoland
8:35 am