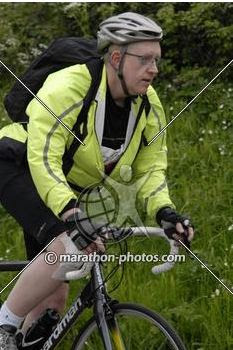 As I mentioned in my previous post, I had a 45 mile charity bike ride lined up for the 20th May. This was for the Prince's Trust and was called the Palace to Palace ride.

I'm a big fan of being prepared for such things which is why I had been doing 40 mile rides around Derbyshire for weeks before the main event. The terrain near Warwick Castle looked rather flat compared to the Peak District so I should be fine.

The company I work for laid on a coach and bike transport so that all the riders from Sheffield could get down to Warwick on time, but this meant we had to meet at the office at 05:20am. An early start but what a fun ride into town with no traffic, only having to avoid the odd hardcore drunk that was still out and about from the previous evening.

We crammed the 16 bikes into the trailer that measured 8ft x 6ft x 4ft (literally crammed) and set off for Warwick. The coach was rather subdued, probably due to the early start. I took the opportunity to quaff a bottle of Beet It! Concentrated beetroot juice that my brother promised me would increase my riding ability.

Once we arrived the bikes were reverse jig-sawed out of the trailer and various bits reattached. Brakes tested and tyre pressures checked and we were ready to go.

This is the first cycling event I have entered. I normally ride alone and the largest group I have ridden in is a massive 3! Well, if you can count McStreet as being in the group as he was so slow. ;-) Cycling with 700 other riders was going to be different to say the least, even if we were on staggered starts.

We were all released in batches of 30 or so. Gman, Chappers and a few others were in the group ahead which nicely presented a target. Most of the others from SDL were in my group, including Russ and Rich from Sheffield IT. There was a countdown and we were off.

Russ, Rich and I started at an excellent pace, breaking away from the rest of the group and forming our own mini peloton. We cracked on at about 20mph for the first 15 miles or so and then Russ started to pull away. He was like man possessed!!

Although Russ was ahead I still kept in touch with him and I settled in and started to really enjoy the ride. The countryside was stunning, the roads were pretty smooth, at least compared to Sheffield roads, and the route was what I would describe as rather flat, although others who had not been training in Derbyshire disagreed.

As I rode through the rather nice countryside I begin to notice the completely inappropriate bikes some people were riding. First of all, just before we set off, Gman had to apply an emergency splosh of oil to Chappers bike as it was so dirty and rusty that there were practically sparks flying out of the back as he rode along. This was not the only case of a badly maintained bike. There were some real old clunkers that made a terrible noise as they were ridden. I got the feeling that people didn't take a 45 mile bike ride as seriously as they should. The clunkers were not the only issues with bikes though. There were a lot of people riding full suspension mountain bikes. I don't even mean full carbon ultra light ones either I mean £79.99 from Halfords! The effort to drag these bikes round the route must have been immense!!!! Full respect to the riders if they finished on one of those!

Anyway, back to the ride.

There I was riding along at a fair old pace and really enjoying myself when Alison (one of our group) rode past me using her aero bars. Now Alison is not your normal rider. She's super fit and does things like swim to the Isle of Man to go to the festival instead of catching a ferry like most people, and cycles hundreds of miles at a much faster pace than I could ever manage. She's obviously made of Sheffield steel!! However, I knew that she had been cycling round France the week before and had covered hundreds of miles already so was probably slightly tired. Now's my chance I thought!

Alison was not riding much faster than I was so I upped my pace, the plan being to overtake her even if only briefly. I pulled out to the right to make my glorious move, got halfway past her when she swerved right and knocked us both off at about 22mph.

What actually happened was that there was a water stop on the right that she wanted to turn into it and didn't know I was there. The stop was not well signposted and I didn't have a clue that it was there or I would obviously not even think of overtaking at that point. I felt a right plum I can tell you!

I seemed to end up with my bike lying on top of me. Not sure how that happened but it saved the frame from getting scratched too badly (silver linings?). My rear brake was knocked against my rear wheel and my bartape on my nice new six week old bike was scraped all over the road but apart from that the bike was fine.

I however came of a bit worse. My knee was badly grazed and cut, my elbow was bruised and grazed and I had somehow managed to punch myself in the face when I landed and so was sporting a lovely black eye. Not a good look.

Luckily the people at the water station patched Alison and I up and fixed our bikes and we were off again. It took a while to get going as we had cooled down but after about 15 minutes I was back in the game.

The rest of the ride was rather uneventful which was a good thing. By the end my back was aching and my newly bandaged knee was beginning to set solid, kept loose only by my constant pedaling, but apart from that I felt good.

As I arrived back at Warwick Castle I was guided through the carpark and onto a finishing straight with people applauding and cheering which made me smile. Once over the finish line I was given my medal and sent off to the food tents for my free lunch. I met up with the others in my group who had already finished due to not having take a tumble and listened to the rumours of my accident that had Chinese whispered their way from me falling off to me being carried off in an ambulance!

This was a great ride.Apart from the crash that is. I managed to keep to an average of 15.5 mph which meant I finished in under 3 hours which I was very pleased about, and to top it all off we got a medal at the end.

Well done to everyone who finished. Many of the riders were totally unprepared and therefore had to dig deep to complete the course, and some knew how hard it was going to be and knew that they were under-prepared but turned up on the day and got to the end. Nice one!!

There is another Palace 2 Palace in October. This one is in the center of London and goes from Buckingham Palace to Windsor Castle. I'm going to be signing up for that one too. Who's with me?