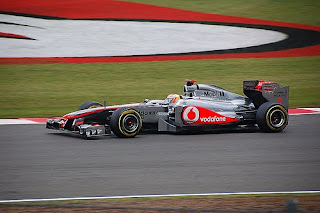 OK, so it was 2 weeks ago but its hard to find time to write posts at the moment. :-)
After missing last years British Grand Prix due to buying a house and the following lack of funds, Victoria and I were determined to go this year. In fact we were so grumpy last year about missing out that we ordered the tickets straight after qualifying last year, a year in advance!
How about that for pre-planning.
Our tickets were on the new Internationl Pit Straight. The start line has been moved from the traditional place to the other side of the circuit to allow more room for the teams and to allow the building of a MASSIVE pit complex. It really is impressive as you can see here.
When we normally go to the Grand Prix we like our tickets for race day to be at the front of the grid and we were slightly dissappointed to find we were nearer the back this year. Not a problem though when we found that we were right opposite the podium and the finish line and could see right down to Stowe, Vale and Club. What great seats!
We were staying in the Ibis hotel just off the M1 junction 18. The hotel was great and all the staff were Spanish for some reason. Not what you would expect in the middle of England. They were very polite and efficient apart from when one girl didn't know what a gin and tonic was. Very strange. The hotel was clean and modern and the food was excellent which is all you really need.
We went down on the Thursday this year. We would normally set off early Friday and head straight to the circuit but we were sick of missing the beginning of first practice so we went mad and had an extra night away.
Friday was practice 1 and 2 and the first time we had seen the new circuit and pit buildings. What an improvement! The place looked much more modern and up to date and as I said our seats were great.
We watched practice 1 from the pit straight and had Kobiyashi crash right in front of us which was nice of him. It was also great when Alonso spun his car and 90,000 fans cheered. We watched practice 2 from Woodcote which meant we could see the cars coming down the Wellington straight in the wet which was very impressive.
Saturday was practice 2 and qualifying. We got up at 5am (!) and left for the curcuit as soon as we were ready. As we always say, we'd rather be sat at the circuit rather than being stuck in the car in a massive queue of traffic. When we got there we bought hot chocolate and fresh doughnuts and went and sat in a stand. Yummy. We watched practice 2 from the pit straight again and qualifying from Luffield which was great as we saw Alonso go off-roading during Q1. More cheers! Unfortunately Lewis Hamilton only qualified 10th which was not too good.
Sunday was race day which meant another 5am start. We essentially spent the whole of Sunday sat in our seats watching the various races and goings on that accompany a Grand Prix. GP3 races, GP2 races, celeb spotting on the grid and finally the race.
The race was great even though Alonso won which is not something you want to pay hundreds of pounds to see. At least it wasn't Vettel! Hamilton drove like a man possessed and was up to second at one point before his team told him he was short fueled and if he didn't slow down he would not finish! DOH!
Apart from that it was a great race, as usual at Silverstone, and a fantastic weekend in general. It was nice to get back to the kids though. We really miss them when we are away for a few days.
I've said this before and I'll say it again. Even if you only have a passing interest in motorsport you really should attend a Grand Prix at least once in your life, and what better race than the British Grand Prix. You can join a hundred thousand Mclaren fans in cheering on Lewis and Jenson.
Pictures of the weekend are here. Beware! They are very heavily bias towards pictures of cars which while obvious to most people seems to have confused my brother. :-)
Labels: 2011 British Grand Prix Silverstone

Fernando Alonso Is A Twat